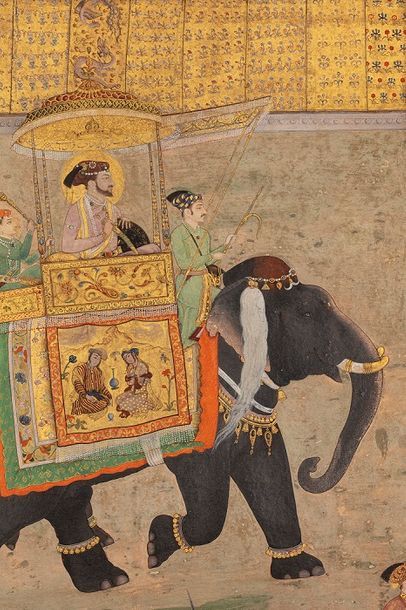 "The oeuvre of ‘Abid, long appreciated for its precision and elegance, is gradually becoming better documented and understood. The key to ‘Abid’s work remains his artistic patrimony. He was the son of Aqa Riza, an accomplished Persian-born artist who worked for Prince Salim from the late 1580s, continued in his service through the rebellious years (1600-04) in Allahabad, and remained active sporadically for Emperor Jahangir after his accession in 1605. ‘Abid accompanied his father to Allahabad, as did his younger brother, Abu’l Hasan, a prodigy who soon came to enjoy such imperial favor that his name or epithet (Nadir al-Zaman, “Wonder of the age”) – not his father’s – is invoked in several of ‘Abid’s signatures and ascriptions, including the one on this painting, where it appears humbly on the drab ground before Emperor Shah Jahan’s elephant.

‘Abid’s earliest attributed works – one drawing of Babur and attendants in a garden1
and another of a seated courtier date to the Allahabad period, that is, 1600-04. In these early works he exhibits a penchant for the calligraphic line characteristic of his Persian heritage and combines it with relatively thick bodies, broad, voluminous heads, and quite three-dimensional hands. Upon his return to Agra, ‘Abid refines all these qualities in his next known works, two attributed illustrations in the 1605-06 Bustan of Sa‘di, and two more in the c. 1605-07 Kulliyyat of Sa‘di. He tones down the graphic explicitness of his figures’ idiosyncratic facial features in these fully painted works, thereby allowing his characters to project a subtler sense of individuality and dignified expressiveness. At the same time, ‘Abid begins to employ architecture as a compositional framing device and shows a taste for rich architectural decorative patterns. About 1610-15, later, he supplied two small illustrations to a fragmentary Gulistan of Sa‘di that was cut up about 1640 and used as panels on a lavish mirror case now in Copenhagen. In both, as in several other works (including the present painting), he features two figures wearing a broadly striped black-and-white robe, a garment almost never depicted by other Mughal artists.

While several other paintings from about the midpoint of Jahangir’s reign (1605-27) can reasonably be attributed to ‘Abid, the artist’s first work with an indisputable ascription or signature is his standing portrait of Emperor Shah Jahan holding an emerald. The artist’s signature is written in gold ink on the painting field and reads “work of Muhammad ‘Abid, son of Aqa Riza, brother of Nadir al-Zaman. Year one (ahad) [1627-28].” In the same regnal year, ‘Abid produced an exquisite oval portrait of Mumtaz Mahal, Shah Jahan’s empress, that is inscribed “work of the least of the houseborn, ‘Abid [son of] Aqa Riza Shah Jahani,” and dated the first of Ramadan A.H. 1037, year one (ahad), 1037/5 May 1628 in the city of Agra. In the following year, ‘Abid painted the first of his imperial group scenes, depicting an enthroned Shah Jahan seated before Mahabat Khan and encircled by courtiers with gifts of bags of money and platters of jewels. The discreet signature establishes the formula used in the present painting: “work of ‘Abid, brother of Nadir al-Zaman of Mashhad, completed in year 2 [1629-30]. Both paintings record historical events and seem to have been destined for inclusion in the later Padshahnama manuscript. Both are also entirely in keeping with two magisterial paintings now in the Padshahnama manuscript.

The last phase of ‘Abid’s career is represented by two other ascribed paintings of the next decade, and a fine signed work dated to c. 1645 in the Gulistan of Sa ‘di now in the Freer Gallery. ‘Abid is named as the father of Fazl, a little-known painter active in the 1640s who worked in a meticulous style similar to that of his famous father.”